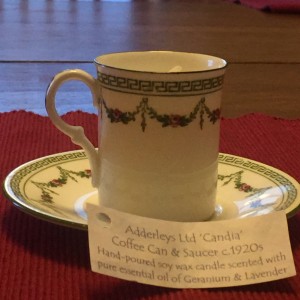 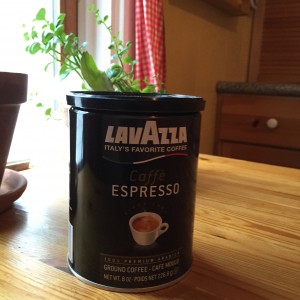 Q: Which of these pictures shows a “coffee can”?
A: Both do. The one on the left is a coffee can & saucer friends brought from England, the one on the right is the coffee can in my New York kitchen.

When I receive a request to translate a document “from German to English”, one of my first questions is: US or UK? These are the two variants of English with which I am most familiar and into which I translate. But there are many other countries around the world where English is the (or one of the) official or majority language(s). And each of these countries has its own variation on English, often with quite a few loan words and/or grammatical constructs borrowed from non-European languages.

Nigeria, for example, is home to a variety of peoples with their own, often mutually unintelligible, languages—Ibo, Yoruba, Hausa, Fulani, among others. As Jeanette Gilsdorf of California State University writes: “When Nigeria declared independence in 1960, English had become basic to its unity. … Nigeria made English its own, giving rise to Standard Nigerian English.”

Similarly, there is Standard Australian English, Jamaican Standard English, etc. To be sure, all these Englishes are distinguished by their accents—which are irrelevant to written translations. However, vocabulary also differs significantly, and sometimes grammatical structures vary, as well. A few months ago I was training employees in the US using a manual originally written in the UK. I introduced each session with a mini vocabulary lesson: till means cash register, etc.

Plus expressions for date and time change between countries. When our Irish house guest says she will be back at “half five”, I always have to mentally convert—ah, we will see her at 5:30 pm (17:30). Then I call my father in Austria, where the German equivalent of “half five” (halb fünf) means 4:30 pm (16:30). Life can be a bit confusing sometimes…

So if you need a text translated into English, consider where it will be distributed and request the appropriate variant of the language. Or, if the text will be read by customers all over the English-speaking world, ask that it be “internationalized”. You will still have to pick US or UK spelling, but the translator will write out dates (rather than using, say, 1/11/14—which could be January 11 or November 1) and adjust wording and formatting to a more global audience.

Even if your document is already in English, consider having it “localized”—adapted to another variant of English. If a US reader is told that “the spanner is located in the boot of the lorry”, he or she is unlikely to find the wrench in the trunk of the truck. That could be a problem when stranded on the side of the motorway (highway) in a snow storm—such as the blizzard we just had in New York.

Tweet
This article was posted in Global English, Translation Services. Bookmark the permalink. Follow comments with the RSS feed for this post. Both comments and trackbacks are closed.